I received entry into the AllState Hot Chocolate Charlotte15K as a part of being a BibRave Pro. Check out BibRave.com to read and write race reviews.

In my last blog post, I talked about how I had to change up my original plan for my Hot Chocolate 15K Virtual Race. That instead of running the event on the Charlotte event date of February 20th, I had to run my race early due to having a knee reconstruction surgery this week. It will be 4 weeks before I am able to walk again and another 8 weeks after that before I will be cleared to run. So rather than waiting until after, I decided to run it early, because you know I was for sure going to earn that awesome SWAG.

In addition to my race, I used the opportunity to run the route that I had planned for the runners of the Virtual Race event to check the distance and to see if there were any issues on the route. So on January 16th, I set out bright and early in the cold to the race event site, Knowledge Park, to set off to run the routes. Since the event had both a 15K and a 5K race, I made a 10K route and a 5K route so that the 15K runners can start out earlier and join back in with the 5K runners to finish together. 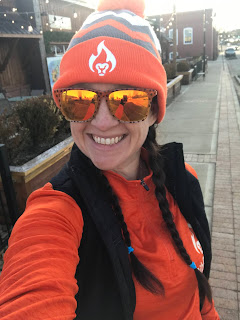 It was a cold morning, but not nearly as cold as the last Hot Chocolate 15K that I ran, which was just 22 degrees when we started!! Ugh! This time it was 31 which was much more bearable. I followed the 10K route that went through downtown Rock Hill, around Glencarin Gardens to Winthrop Lake, to the Winthrop Campus and back to Knowledge Perk and then back out again for the 5K which lead back to the Winthrop campus and towards downtown Rock Hill and back up to Knowledge Perk to finish.
As for the route, I did make 2 changes in route. One change was to move a turn a block so the route crossed at a stop light with a crosswalk for safety and another change to go down a more scenic street. But even with the route changes, I hit exactly 15K when I got back to the street corner by Knowledge Perk where I started. So yay! 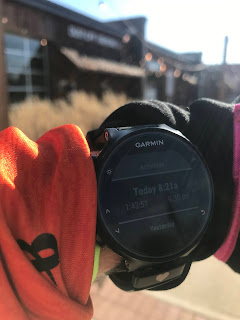 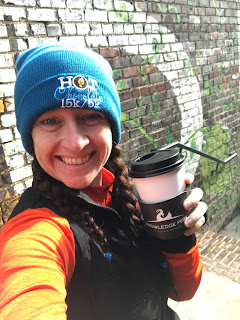 When I finished my Virtual Hot Chocolate 15K Charlotte, I of course had to get a nice hot cup of Hot Chocolate. It was delicious! And so nice after a cold run. My time wasn't spectacular,  but I did take it easy due to my knees and stopped to take a few pictures along the way to clarify some things on the route.
Since I ran my race early, I haven't yet received my SWAG. They will start shipping out packets on January 31st, well before the race date of February 20th. And as for my event, I currently have 30 racers confirmed currently and I think a few more still will join. I am really excited about some of the plans that I have made to make it more like a real race event, one that runners are sorely missing including race day pictures, awards and finish line treats.
When BibRave and RAM racing found out about our little event and sent us a box of treats including chocolates and HC magnets. I may have indulged in a chocolate piece to celebrate my finish. 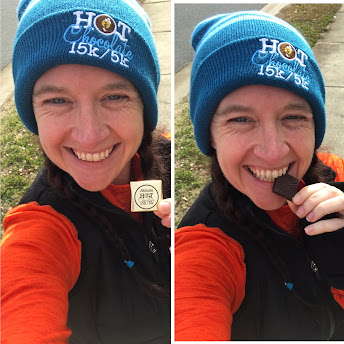 I'll be sure to share pics of my awesome gear once it arrives. And of course share all the epic race day fun that I have planned on February 20th. In the meantime, if you want to earn your own SWAG and/or plan your own event, register here: www.hotchocolate15K/charlotte. You can score yourself a cool HC branded Tech Hat (seen above) using code BRHC20 when you check out.
Posted by Lissa at 2:03 PM