I received entry into the A Christmas Story Virtual Run as a part of being a BibRave Pro. Check out BibRave.com to read and write race reviews.

I know what some of you are thinking. You are so over Virtual Races. I get it, I 100% feel the pain of missing live races too, but I've learned to love Virtual Racing, and you can too. The trick is to treat them like an event in their own right, instead of just another run you were planning to do anyways. Take, for example, the epic Virtual Race Day event that my running bestie Kim (aka Barking Mad About Running) put on this weekend.
When we first heard about the Elf Virtual Run and the A Christmas Story Virtual Run, we knew we wanted in. I mean A Christmas Story is one of my favorite Christmas movies ever (besides of course Die Hard) and Kim loves Elf, so we knew our teams instantly. I registered for #TeamRalphie and she #TeamBuddy. And when I admitted that I had in fact never seen Elf, it was soon decided that not only would we be running our 5Ks, but we'd watch the movies as well. We brainstormed a few other fun activities to make it a fun filled day and started recruiting for our teams!
While our rosters were quickly filling Virtually of others for #TeamRalphie and #TeamBuddy and we were also able to recruit a couple local friends (one for each team) to run it with us. 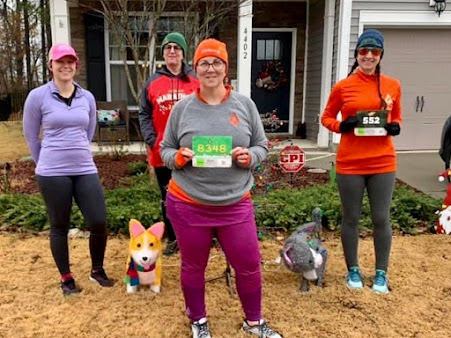 I arrived at Kim's house a 9 am on race day, this past Sunday 12/20.
Unfortunately, it was raining. Fortunately, it was a Virtual Race, so that meant that we could wait for the rain to pass a bit before starting. Score another point for Virtual Races! Weather not cooperating, no problem, just wait a bit. After about 45 minutes, the rain had stopped and we decided it was go time.
#TeamRalphie (me and Kendal) were running it and #TeamBuddy (Kim and Toni) were walking it. Kim provided Kendal and I routes and after a quick Start Line group photo, she counted us down and we were off.
I wasn't expecting too much out of my 5K since I still haven't recovered my speed from my knee surgery, but I felt pretty good so I decided to push it a bit. It helped having Kendal with me for the first mile to provide that bit of competitive push. We hit a decent hill and I heard her tell me to keep going so I did, realizing that if I could keep my pace right about where I was, I had a good chance at breaking a 30 minute 5K for the first time since my surgery, despite the hilly route. The course was very straightforward and Kim's directions were perfect. I finished 5K just short of Kim's house and was thrilled with my 29:02 time. 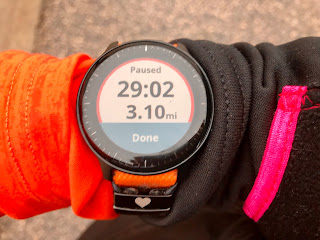 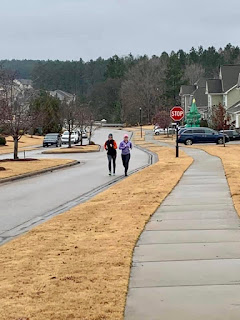 I circled back to find Kendal and run her in to finish her race, which was also faster than she had originally thought she would run. We then jogged the course back to find #TeamBuddy and walked in with them. When all was said and done, my 5K ended up being 5 miles! Which was perfect for me as I still need about 30 more miles before the end of the year to hit my Yearly Mileage goal of 1255 (2020 kilometers).
After we finished our miles, we went back to Kim's house to put on our finisher swag sweatshirts and show off our medals. Her awesome hubby made us some mimosas and took a few pics before making us some breakfast. He's so good to us. 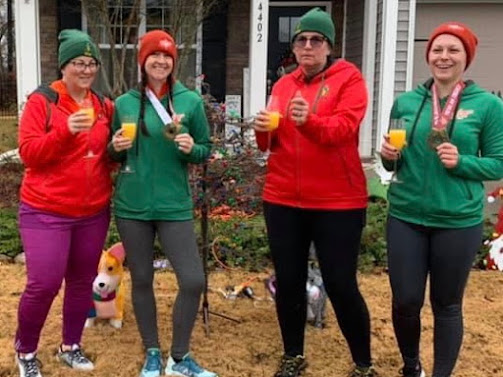 After we got all fed up, we decided to watch our first movie, Elf. I had never seen it, but I kinda knew the gist. I mean it is hard to exist in the world, especially around Christmastime and not see and hear  memes and quotes from the movie constantly. And it wasn't that I didn't think that I would like it, it just somehow never made it into my limited movie viewing. So it was really fun to see all the familiar quotes and scenes where they belonged. Kim and I live tweeted it on Twitter if you want to check it out here: https://twitter.com/BarkingMadRun/status/1340710454054842371 It was a cute movie, and I am sure I will watch it again.
After Elf we decided to do our most dangerous planned activity - a Red Ryder BB Gun shooting competition. This was another first for me, I'd never shot a gun before, unless you count water guns that is. It was just a fun coincidence that Kim's husband had the same BB gun from A Christmas Story, so of course we HAD to use it. Kim drew tree targets and after a quick lesson, I went first. I hit 9/10 shots on the paper, which I thought was pretty good consider my lack of any shooting experience. The others did much better than me, but it was lots of fun. And bonus, I didn't shoot my eye out!!

Next up, Kim had gotten us some super yummy hot cocoa bombs. If you have never had one of these, OMG, they are so good! Basically, they are round shells made from chocolate that are packed with goodies, so that when you pour hot milk over them, they bust open in yummy goodness. I took a video of mine exploding you can see here: https://twitter.com/RunNerdGirl/status/1340749830897999875 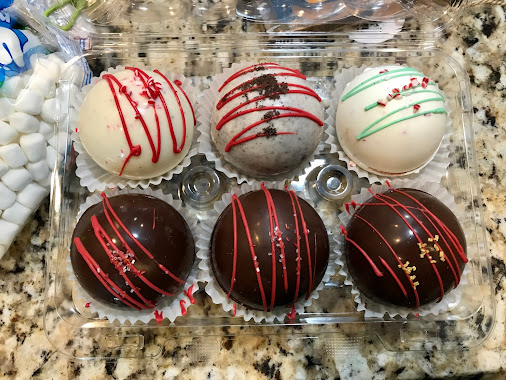 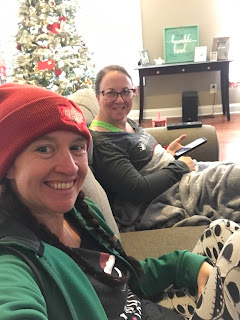 Last up, we cuddled up on the couch again to watch A Christmas Story. I love this movie. I spend most of it giggling and quoting it. We also live tweeting this one and you can see that silliness here: https://twitter.com/RunNerdGirl/status/1340754712791048194
By the time the movie was over, it had been a long, fun Race Day. And if you are interested in hosting your own Elf and/or A Christmas Story Epic Virtual Race Day, good news, there are still a few days left to register. But don't wait too long, or you will end up saying FUUUUUUUUUGE and calling yourself a Cotton Headed Ninny Muggins. Here are the registration links:

I cannot wait for our next big Virtual Race event, which looks like it is going to be the Hot Chocolate Charlotte 15K/5K. We haven't settled on our planning quite yet, but knowing the two of us, it is going to be another epic day! You can register here: https://www.hotchocolate15k.com/charlotte/ to join us as well. Register with code HCBR20 and you will receive a Hot Chocolate 15K tech hat.
So that's my take. You can check out Kim's account of our race day on her blog here: http://barkingmadaboutrunning.blogspot.com/2020/12/son-of-nutcracker-it-was-elf-virtual.html
Posted by Lissa at 12:36 PM 1 comment:

I received entry into the A Christmas Story Virtual Run as a part of being a BibRave Pro. Check out BibRave.com to read and write race reviews.

I have an amazing running friend who always says to me when it comes to running, "If it's not fun, don't do it". I often hear her wise words when struggling through a tough race or race and ask myself, am I really having fun, an ultimately the answer is yes (even if I don't realize it at first). Ultimately, I love running and every run, even crap runs, make you just a bit better.
But I'll be honest, this year it has been a struggle to keep things fun. 2020 has been a lot. I've struggled through having knee surgery this year and basically everything that makes running fun has been cancelled or deferred. Finding the fun has been hard. So when I heard about the A Christmas Story and Elf Virtual Races, I totally thought to myself, this looks like an opportunity to make some fun!
The moment I learned about the races, I messaged my trusting running bestie, Kim (aka BarkingMadAboutRunning) and told her we HAVE to plan one of our Epic Race Day Adventures (see here for our last one: https://runnerdgirl.blogspot.com/2020/06/run-for-zoo-virtual-recap.html. She was immediately in, because OF COUSE SHE WAS!!
First off, I knew which races we would be doing. We've had this ongoing thing for years that Kim is super into Christmas to the extreme (basically Buddy) and I am way more of a Ralphie (I'd totally shoot my eye out) so she would be running the Elf Virtual Run and I would tackle the A Christmas Story Virtual Run.
Race day will be Dec 20 and we are going to have an amazing race day event at Kim's house. We'll do our 5Ks in her neighborhood. After, we are planning themed events - Christmas treats and cheerful run for Elf and a Red Ryder BB shooting contest for ACS (her hubby actually has a REAL one!!) There will be décor and themed stuff for both movies. Then, we plan to watch both movies, and especially since I have never seen Elf (can you believe it) we are going to "live tweet" as we watch. So feel free to join in with us on Twitter the day of the event. We are still working out the time for maximum-festivity, but I will post. 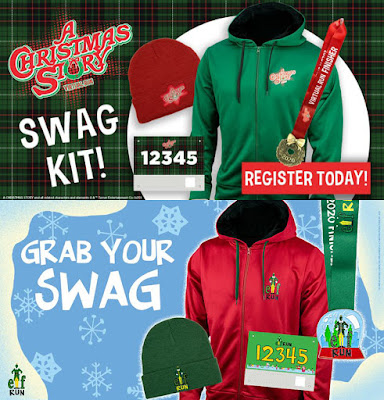 And speaking of joining us, why not go ahead and register as well!
You can join #TeamRalphie here: https://www.achristmasstoryvirtualrun.com/virtual/
And #TeamBuddy here: https://www.elfvirtualrun.com/virtual/
The SWAG looks amazing and I cannot wait to receive it!
If you have any other ideas of things we should plan for our race next week, please drop some suggestions in the comments below. I cannot wait, and will be sure to post all about it with tons of pictures after. You'll want to read the recap and find out if I shot my eye out!
Posted by Lissa at 8:19 AM No comments: