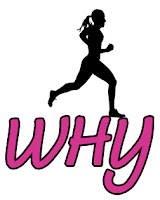 I have struggled with being healthy for most of my adult life. Never really happy with how I looked or how I felt, but not really unhappy enough to do much more about it than sporadic dieting and/or exercise. I wasn't really obese, but I wasn't thin by any stretch of the imagination. Just in that zone where you get comfortable.

In Feb. 2014, we decided to take my little one on a birthday trip to Disney World. When we got home, I started the daunting task of going through the over 1,000 photos we (and others in our group of 9) took during the week long trip. Looking at photo after photo after photo, there was no denying it, I looked FAT. That week I decided that was it. I was going to get into shape. I didn't have a whole lot of disposable income due to just dropping $5,000 on a week long Disney trip, so I figured, hey, it's free to run. I used  a gift card left over from Christmas to Kohls to buy a pair of Nike running shoes and downloaded a free Couch to 5K app on my phone and hit the road. Almost 3 years later, I have learned so much more (including that running is NOT free) and I'm still at it. I've lost 40 pounds, become so much healthier, accomplished a number of goals and made life-long friendships.

So for me, ultimately it started as a free/cheap way to lose weight, but running has become a bit addictive to me now. I start to get antsy if I go to long without a run now. It has become a part of who I am.

How about you? Why do you run?
Posted by Lissa at 7:29 AM No comments:

Overcoming Self Doubt - Or At Least Pretending To 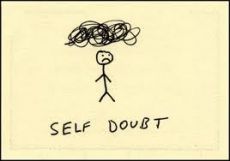 I haven't posted again since my first post because I was in a kind of bad place motivation wise. See, I am not to most optimistic girl on the block, and I had a HUGE goal race this past weekend. One that would determine my running course for the rest of the year. And I had little confidence I would make it and was letting that self doubt affect everything else in my life. Long story short - I needed to hit a 10K time of or below 58:13 to qualify for a race team that I've really really been wanting to make. And this was it, last chance. Plus the last qualification timing I missed by 7 seconds. 7!!!

Long story short... after all the doubt, up to and including a mini breakdown at the start line where a friend let me cry on her shoulder, I did it. I ran it in 56:49. I'd like to say I had a dig deep moment and convinced myself I could do it and that fueled me, but the truth is, on the course even I was so convinced I'd miss the mark I actually stopped on one hill for a few seconds and sobbed a little before forcing myself to keep going. That little negative voice inside is my weakness, but being stubborn keeps it a bit at bay - I know this about myself and will struggle with it forever I think.

So how about you? What do you do when it seems like you'll fail? At one point I joked that I refused to miss the mark by seconds again, that instead, I'd lay down flat on the road when it was obvious I wouldn't make it, and just be done then and there. Luckily my stubbornness won out in the end this time. This time...
Posted by Lissa at 7:14 AM No comments: 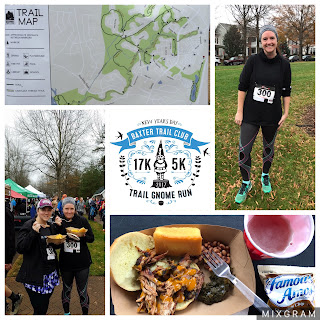 I started the 2017 the same way as I did 2016, by running through the muddy woods with 249 other crazies and consuming yummy "good luck" food afterwards.

This was my second year doing the Baxter Trail Club New Year's Day Run and it will not be my last. This year's race was particularly fun as the swag had a cute Gnome theme, so now I have not only an awesome and adorable tech shirt, but also, all participants that hung around for the door prizes were given a Gnome pint glass.

All week I was anxious about the race as rain was in the forecast off and on both before and during the race. Last year it had rained for almost a full month prior to race day, so I know what this trail is like when it is full on muddy. Luckily, the rain held off until the early morning hours and even then, it was more of a light drizzle than rain. Plus, it pretty much fully stopped during the race. While it was still pretty muddy, conditions were pretty good with only one section really treacherous. With the much improved conditions, I was able to shave about 10 minutes off my time over last year and finished 13th female overall and 4th in my Age Group. While I had really really hoped to place, I cannot be upset about my time.

After the race, the main sponsor, Legal Remedy Brewery, treated us to craft beers on tap and a huge spread of New Year's Southern classics - Pork BBQ, Collards, Black Eye Peas and Cornbread, all to bring such and wealth in the upcoming year. It was crazy yummy and worth the entry just for the food.

I will for sure start of 2018 with this race, and since I will be advancing to the next age group in July, I will for sure place next year. Who knows, I may even brave the 18K.

So how about you? Any running or racing today? Tell me all about it. And have a very Happy 2017!!
Posted by Lissa at 5:26 PM No comments: