The Come See Me Road Races are a part of Rock Hill, SC's Come See Me Festival, a 10 day festival each spring with events all over town. This was my second time running the Come See Me Road Race 5K, though this year the race location moved back into the center of Rock Hill starting at the Winthrop University Coliseum. The past 3 years, the Road Races included a half marathon (which I had run multiple times), but with the move into town, the Half was eliminated and a 10K added. Was super disappointed about that decision as this Half had become my benchmark race for improvement year over year. But I will admit that it was nice to not have to wake up early for a race for once as it took place just 2 miles from my house. Heck, I considered running to the race!


Packet pickup was Friday evening at the Winthrop Coliseum, where the race would take place (you could also pick up morning of). It was easy in and easy out with lots of parking as the area is designed for large crowds. Packets were well organized. There were, however, lots of complaints about the race shirts. The good news was they were tech shirts. The bad news is that they were huge-to-size. I ordered a Med. as I usually do and realized upon holding it up that I easily could have fit 3 of me in it. There were no extra shirts for exchanges and those signing up at packet pick up were not going to get shirts, so I ended up actually giving my shirt to a man who was signing up for his first race ever. I doubt I would have worn the way too big shirt, and I felt he would appreciate the shirt much more. I heard from several others that the shirts in their packets did not actually match their registration order and some who had ordered before the deadline even did not receive shirts either. The packet also contained a 5K or 10K magnet, water bottle and chapstick with sponsor logos in a cloth bag (shopping type, not drawstring).
The morning of the race was a bit confusing as there was not much information on where to go. The race information said that the race started at the Winthrop University Coliseum. The Coliseum in fact is in the center of a 325 acre sports complex and the race actually started at Winthrop Lake, which is a pretty good hike from the Coliseum. There was also no official "Start" line, just a mark on the road and lots of people were asking where exactly to line up. On top of that, apparently the bullhorn for the start broke, so a volunteer sat on someone's shoulders and shouted to start the race. 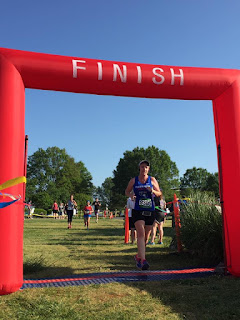 From the race start, I'll be honest, I couldn't say if the route was well marked or not, I am assuming it was, but since again the race was so close to my house, I literally run this area several times a week so I could do it with my eyes closed. It is a beautiful area to run through, past the lake, through the sports complex past the baseball field, Coliseum and tennis courts and then down one of the most beautiful residential streets in Rock Hill. The route turns right before Winthrop University, and back up another street leading back to the sports complex. The final mile was a lap around the other side of the sports complex with Finish Line set up at the Historic Dairy Barn stone wall (the sports complex used to be a farm when Winthrop first opened). It's a super simple course, but I may be biased because again, I run this route a lot. I heard from friends running the 10K that the 10K course was a bit rough and knowing their route, I would agree. There was a tricky bit that goes down a pretty small bike path that could be pretty confusing if you didn't know the area.
The 5K began at 8:30 am and honestly it was already hot. Would have much preferred even a half hour earlier start time due to the heat. There were 2 water stations on the course that had plenty of volunteers handing out water. The finish had lots of water, oranges, bananas and bagels. All finishers, 5K and 10K receive a medal.
Overall it was a good local race and I will do it again for sure as it is a super convenient race and lots of my running buddies do it. I spend more time socializing this race than running it. My results were ok (28:54 with a 4th place AG finish) but I know I could have done better, so I was disappointed. I'm really hoping they bring back the Half (Race Director said they were looking into).
Posted by Lissa at 6:35 AM No comments:

Happy Runniversary to Me

Today is the Anniversary of my first race. 3 years ago and a bit more, I decided I wanted to get healthy and for some reason, running was my answer. In Feb. 2014, I set a goal, I was going to run a 5K at the annual Come See Me festival that April. I ordered a Couch to 5K program on my phone and set to work. I followed the plan to a T and on race day, I was incredibly nervous, but ready. That was 3 years ago today. I did my first 5K, running the whole way, in a respectable 35:40 min.

3 years, -40 lbs, hundreds of new running friends and too many races later to count later, I am still going. Every year when the Come See Me Road Races roll around I get a bit nostalgic. The past 2 years, I ran the Half Marathon option, but this year I am doing the 5K again (they phased out the Half this year) on April 22nd. Here's to many more!

What was your first race? Have you run it since?
Posted by Lissa at 5:35 AM No comments: