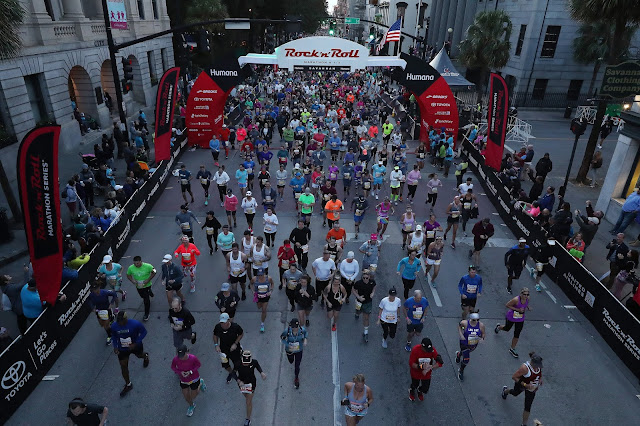 And that means two things.

See, you may recall that I have set myself a goal of a sub 2 hour Half on Saturday at the Rock n Roll Savannah Half Marathon. This will have me cutting about 5 minutes off last year's time. I've been training like crazy and hopefully, all my hard work will pay off.

I am tentatively optimistic. I know I have gotten faster since last year. Just this weekend, I ran a 5K that I had done last year and cut 3 minutes off that time. 3 minutes off just 3.1 miles so for sure I can cut 5 minutes off of 13.1! The hardest part will be to not go out too fast. The plan here is to find the 2:00 pacer and basically stalk them for about 10 miles of the race and then see how I feel. A friend of mine has also offered to pace me, and I haven't decided if I will take her up on that or not. I'm pretty solitary during a race, but the extra support may be good. IDK.

So yeah, right now it is all about packing to make sure that I have everything that I need - clothes, shoes, gels, hat, sunglasses, gear, KT Tape, all the race day essentials. I already have downloaded the Rock n Roll Marathon Series app and have my Bib numbers (I am also doing the 5K on Sunday afternoon). I've been obsessively weather stalking (temps are going down, booooo! And I've already started laying out stuff to pack. Finally, I am putting in my last few easy runs before the BIG EVENT!

I will be leaving Friday morning and riding down with some friends to Savannah. We have a pretty huge group going (26!!) and are going to have a great time. If you follow me on Twitter and/or Instagram, you will for sure be getting lots of updates for the weekend.

If you are going to be at the Rock n Roll Savannah also, we plan to hit up the Expo on Friday around 4 pm. Look for me, I'll be in BibRave Orange!

Well, I guess that is about it. I'm sure I am forgetting something and if you've spotted it, please let me know in the comments. Or, if you just want to wish me luck, you can do that as well.

Disclaimer: I am participating in the NYRR Virtual Halfway There 13.1M as part of being a BibRave Pro. Learn more about becoming a BibRave Pro (ambassador), and check out BibRave.com to review, find, and write race reviews! 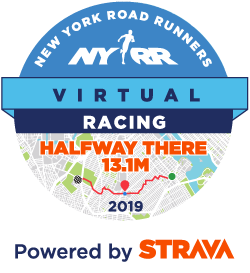 You may recall a few weeks ago, I told you about the NYRR Virtual Halfway There 13.1M virtual race that had registered for. Well, the virtual finish line has passed for 7600+ participants who joined on Strava. So how did it go?

Well we had from Sept. 7th until Oct. 13th to cover the 13.1 Half Marathon miles, anytime, anyplace. I had a few different options for mine since I have been pretty aggressively training for the Rock n Roll Savannah Half Marathon on Nov. 2nd. In fact, I had 4 weekends during that time that I was scheduled to run 13 or more miles. 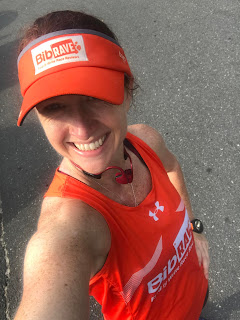 I eventually picked Sept. 28th as my "official" race day. This ended up being pretty big running day for another reason, I joined a new running club that day also. I had known several members of Fast Feet over the years, but had never officially run with them, so I figured, sure, let's share a Virtual race. I think my logic was that I would be less nervous about both if I combined them. Well, I guess it worked, because I had an awesome run with some awesome people.

My goal for my training plan that day was to run 13 miles at a 10:00 pace. Oops, I ran 13.28 at a 9:43 (I'm terrible at slowing down when I need to). But I was happy with my time, and happy with my run. I of course tracked everything with Strava so I got an awesome little badge for my account and added to the leaderboard. Fun!

Overall, it was a lot of fun. I got to connect with some awesome people by joining both the Strava Challenge group and the NYRR Virtual Racing Facebook Group. Virtual races like these are awesome opportunities to help motivate you and connect you to other runners. Plus you can pick your date/time so if the weather is not optimal, no big deal, move it!

I would totally do another NYRR Virtual. And lucky for me, they have several! Just check out their website here for more upcoming races and details. https://nyrr.org/run/race-calendar

Have you ever run a virtual race? If so, which one and what did you like or not like about it? Let me know in the comments below. 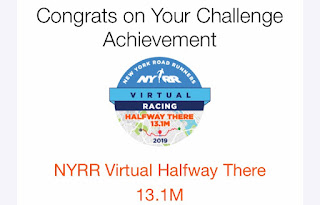