Flipping Out Over FlipBelt Crops

I've mentioned before a few times here that I prefer to run with music, and to do so requires me to carry my phone on me while I run. I've struggled over the years to find the best way to carry my phone and anything else that I needed with me like keys and gels, trying a variety of options from arm bands, belts, tiny "pockets" and even stuffing things in handheld bottles.

Most frequently I would go with a belt as the least intrusive carrying device, but there were still a number of problems, but biggest being that no matter how much I adjusted it, but belt bounced around and would often lead to chafing. No one likes to take a shower after that! 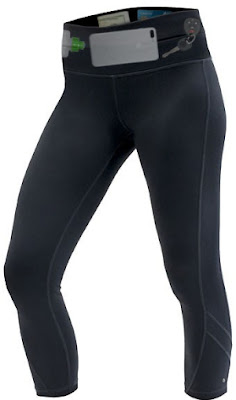 So when I found out that FlipBelt had introduced a pair of crops with built in pockets, I wanted in! I had heard amazing things about the roominess of FlipBelts before, but never run with one so I was excited to try them out. I'm happy to say that they exceeded my expectations!

First let me give you a little info about the crops. Here are their features straight from the FlipBelt website -

They are really comfortable to wear, some of the softest running tights I've worn. I am 5'6" and they rest right in the perfect place for a crop. I've run in them comfortably in temperatures ranging from mid-40s to low 70's pairing with everything from zip-ups, to short sleeves to tanks. Currently, they only come in black, which of course matches everything, but I hope they introduce some other colors in the future.

But what about the pockets!?

These bad boys have pockets for DAYS! There's one huge pocket in the front that has access openings on either side of your hips. This pocket is great for storing all kinds of stuff that you need to get to fairly quickly while running like gels, beans, tissues, route maps, beer money (you know, for after your run) and so on. I can literally stick my arm in there!

On the back of the crops there is also a larger zippered pocket. And when I say larger, I actually mean it. If you take in account my iPhone 7 plus the extra battery case, plus the pocket for my ID and debit card stuck to the back, I carry a pretty substantially sized phone with me. This pocket has no problem containing all of that. 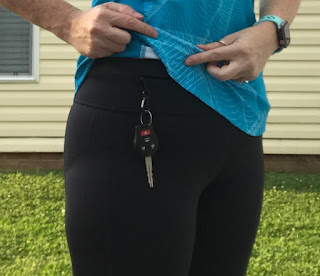 Lastly, inside the front pocket there is a clip for hooking your key on. This is a particular plus to me. See, last November right before a race I was doing my pre-run check of my stuff. I checked my belt one last time to make sure that my gels were in there and when I did, my key fell out, unbeknownst to me at the time. Luckily, I found out sooner rather than later, but enough time had past that I had moved to the starting area. When I figured it out, I sprinted back to where I was and me and two friends frantically searched the grass for my car key. Luckily, we were able to locate it, but I've been paranoid about losing my key every since then. Well not with my FlipBelt Crops. I can rummage through the pocket knowing that my key is safely clipped in.

So, in conclusion, I love these crops! I've worn them several times over the past month for pretty much every type of run imaginable, long, speed, even a race. Heck, I scored me a new 5K PR in them, so I am officially considering them my lucky pants!

All I need now is for them to make a pair of shorts because the temps are going to be heating up here in SC soon!


Want to try them out for yourself? You can get your own pair of FlipBelt Crops at  https://flipbelt.com/running-pants-crops, and save 25% online with the discount code BIBRAVE.


Also, be sure to follow FlipBelt on their socials for fun promotions and product news: